The Bundy Ranch incident is a perfect example of what the 17th amendment has done to this republic. It has rendered every single state powerless to protect themselves, their interests and their residents from the sheer insanity of the Progressive/Socialist agenda. This agenda includes the seizure of private property and increased Federal control over lands that are located within the legal boundaries of each sovereign state. This control also allows the Federal Government the latitude to pick and choose which industries they consider to be “sustainable” or not and whether or not to grant them access to these lands, furthering their oppressive grip on private enterprise and family owned businesses. The interests of the States are being perilously subjugated to the ill will of an overbearing central government.

Rather than weapons of war, the Progressive/Socialists have used their agenda to  silently conquer this republic by instituting a series of supposedly “noble” initiatives that are intended to save one “critter” or another from extinction.  However, beneath their feigned compassion for endangered species, there lays a

dark scheme that is designed to transform these United States into a Socialist Republic.   They unfairly play on the emotions of animal lovers everywhere by convincing them that their efforts have saved an ever growing list of endangered species, when the facts show the opposite. The Endangered Species Act has been an overt failure from a “save a species” standpoint.  Of the thousands of species listed in the act, only a few have shown a mild improvement and their successes cannot be contributed to the policies of the ESA but rather to the efforts of private organizations and associations.  In fact, many of the species listed have declined in numbers because of the ESA.  But, this is a topic for another letter to Liberty.

Let’s be honest, no sane person would choose the existence of a critter over the existence of mankind. Oh, I know, I can already hear the attacks from the environmentalists… “This guy hates animals”. My advice for them is to “SAVE IT!”. My comeback is that  “I love animals”. There is no doubt in my mind that if an environmentalist was stranded in the wilderness with no food and the only thing that stood between their living or dying was an animal on the endangered species list; that the critter would, no doubt, meet it’s maker . Perhaps they would wait a little longer to exercise the demise of the creature than the rest of us; but, they would certainly dine nonetheless.

This scenario proves that all sane people believe that their survival is ultimately more important than the survival of a mere creature. This scenario is not to justify the abuse or waste of any animal but rather exhibit man’s inherent and instinctive will to survive; not to mention his God given dominion over all that is.

Federal control of these sovereign lands is forbidden in Article I Section 8 of our Constitution; it reads that

Congress has the right to:

“Exercise exclusive legislation in all cases whatsoever, over such district (NOT TO EXCEDE 10 MILES SQUARE) …and to exercise like authority over all places PURCHASED BY THE CONSENT OF THE LEGISLATURE OF THE STATE IN WHICH THE SAME SHALL BE, FOR THE ERECTION OF FORTS, MAGAZINES, ARSENALS, DOCKYARDS AND OTHER NEEDFUL BUILDINGS”

Not a word in that clause that mentions a thing about protecting turtles, trees, birds, bats, fish, fowl or the like. It seems to me that sovereign state land can only be PURCHASED with the STATE’S PERMISSION and ONLY for the purpose of protecting and preserving our nation and her citizens; not protecting or preserving wildlife.

What of the lands in oil rich Alaska that the petroleum industry is forbidden to tap because of an obstinate and tyrannical EPA? Hasn’t our energy independence been proven to be a matter of national security? This administration invests in sloppy and badly run enterprises that produce less efficient sources of energy, yet refuses to allow a sovereign state access to a proven and efficient resource naturally stockpiled beneath their soil. What of those same types of lands in Colorado and off the continental shelf where China is allowed to drill but we aren’t!?  The environmentalist, clearly, have way too much control.

How does all this relate to the 17th amendment? Skip back to Bundy Ranch. If the State Legislature of the State of Nevada had TRUE and PROPER representation in Washington DC, the Federal Government would never have dared send their agents against the private citizens in that sovereign state. To begin with, there would have been no “Federal Contract” permitting the Bundy’s to operate that land; it would have been a matter among the Nevada State Legislature, the people of Nevada and the Bundy’s. Forget the drivel about Harry Reid and his possible involvement in this incident, that’s secondary, it’s a smokescreen and dangerous to hang our hats on. Let’s stick with the core issues here; those of state sovereignty and bringing awareness to the destruction that an unconstitutional amendment has wrought upon this republic.

I have no idea whether or not Cliven Bundy’s recent statements stem from prejudice, ignorance or both but they should neither minimize his rights to access land in his own state nor  prevent him from supporting his family. These are separate issues altogether and should not cloud the core issue here: States Rights. The media will discredit his justifiable cause by associating it with his statements…let’s be bigger than that…let’s not lose sight of what this is REALLY all about.

I am aware of the “property clause” in Article IV section 3 of our Constitution. I am also aware that the Supreme Court has interpreted this clause as not to extend federal control of the resources on or below the

soils or on the shorelines or waterways “even if the land or waterway is deemed federal”. Their decision is definite and their intention is clear in respecting and maintaining the sovereignty of each state and the resources therein. Our Founders never intended for the small and obedient central government to pick and choose winners and losers in business nor hinder a state from accessing resources that would spur industries and that would ultimately generate federal revenue. The 17th Amendment has allowed the Federal Government to trample the interests of the State.

Each state in this Union needs two individuals, chosen from the legislature thereof, to stand firm on the floor of the U.S. Senate and say “No” to tyranny. Each state in this Union should have a legislature that is carefully selected by the legal residents thereof that accurately represents their electoral majority; that legislature should be filled with individuals whom are intimate with the needs and values of the people and the state that they represent.

This means building an informed and involved electorate that honorably and responsibly performs it’s Constitutional obligation to elect people and then hold them accountable for the manner in which they vote. Our Founding Father’s dreamed of a republic in which the people were well represented and respected by those whom they elected; a Representative Democracy that was comprised of states that kept the central government in check and shouted orders from the helm of Congress rather than cowering in the stronghold below. They established a well represented republic that was absent of the contemptuous and debilitating effects of the 17th amendment… It’s time to restore order and repeal it! 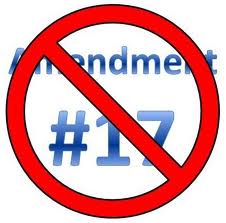