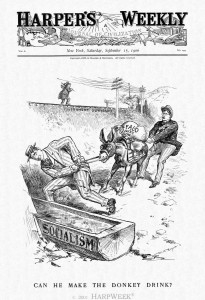 In order to truly and effectively conquer a culture, it is important to eliminate or, at the very least, rewrite their history. Within one generation, a mere 25 years, their traditions, beliefs and practices will literally fade into the past and this new perspective will ultimately become their reality.

A firm understanding of this concept is important because it separates the meaning of two words that are commonly, but incorrectly, used interchangeably…reality and truth. Reality is a person’s perspective on a specific subject and there can be several different perspectives on any given subject. The truth, however, is concealed deeply within the combination of all the perspectives and it requires extra effort from an individual to ponder and think beyond their own perspective to find the actual truth. Sometimes facts are intentionally obscured, left out or altered to influence a desired outcome; when that happens, the perspective has been changed and a new reality can be projected and perceived. So what then happens to truth?

This is not a philosophy lesson by any means but relate the above concept to the media and its potential. The media has the ability to influence, to change one’s perspective, to alter their reality if you will; it’s a very powerful estate and one that needs to be utilized wisely. But I submit to you that its power has been abused. The media, all media, no longer report the facts; they report a perspective and depending upon who is reporting the information is whose reality you are going to get. Now, relate this to history and how those who write it have the ability to change a reality and replace it with a new “truth”.

When we think of William Randolph Hearst the first thing that we think of is Hearst Castle and the amazing stories on how he unselfishly and lavishly entertained the most influential people of his time. We remember hearing about the extended courtesies of his providing entire wardrobes for his guests while they resided at The Castle. We remember how his family so kindly donated Hearst Castle to the State of California so that millions of people could enjoy it. What a wonderful picture history paints of this man. Or should I say what a wonderful picture history RE-paints of this man?

What you will learn here about William Randolph Hearst might surprise you. What you were not told about him was that in the early years of his reign as a media giant he was the ultimate Progressive/Socialist and an enemy of our Constitution. He supported The American Socialist Movement’s philosophy of a large, centralized Federal Government that was to somehow magically solve all of society’s ills. In order to accomplish these ends, he aggressively used his vast influence as a media magnate to destroy the stronghold of the United States Constitution; state’s rights. He knew that by silencing the state’s voice in Washington DC he would be able to open the gates for the Progressive/Socialists to march in and exact their evil influence over our republic.

As if that wasn’t enough, Hearst’s motivation was first and foremost opportunistic. The Socialist Movement provided Hearst with an opportunity to promote himself, his empire and change the very nature of the role that Journalism played in the United States.

In last week’s letter we entered a quote by Comrade Hearst where he very clearly exposed his ambitions for the Press to replace the States Legislatures as the “protectors of the people and the States”! Wait a minute! I thought that was why our Founding Fathers gave us a Constitution! I thought that was why they created a House of Representatives to represent the people and a Senate to represent the states! I thought that it was these elective bodies that were constitutionally assigned the tasks of protecting us from the Federal Government! Why then was it Mr. Hearst’s ambition to have a faceless, unelected body of narcissistic cowards act in their stay? The answer is: POWER, MONEY AND INFLUENCE !

in America. His ambition was clear; to use the press to influence thought, thereby influence policy and pave the way for Socialism’s grand entrance into America. There was, however, something standing in his way; the gatekeeper of Liberty and the watchdog over the Federal Government; it was the powerful United States Senate. In an effort to remove this Constitutional obstacle from his path he unjustifiably targeted the Senate by hiring a literary hit man, by the name of David Graham Phillips, to write a piece that would be published in Hearst’s own Cosmopolitan Magazine. He published a series of 9 Articles beginning in March of 1906 entitled, “The Treason of the Senate”. In these articles, Mr. Phillips exposed the worst in the worst Senators. He exposed their pasts, their inside deals, their crimes and their selfish maneuvering. But the smarmy trick that Mr. Phillips played on America was that he blamed the corruption of these men on the manner in which they were elected. Remember that Senators were originally appointed by each state’s legislature.

Though the allegations of corruption were often trumped up and more often misrepresented, Mr. Phillips was successful in his charade to shift the focus from the actual corruption of these Senators onto the manner in which they were appointed. Keep in mind that the Senate was established to protect state’s rights at the federal level; state’s needs and interests are established and held by each of the states legislatures. His goal was to sever the ties between the state legislatures and the Federal Government. Armed with a host of sensational lies, misrepresentations and outright deceit, Hearst through Phillips, set out to convince the American people that the direct election of their Senators would ultimately give them more power and put an end to the corruption in the Senate. Both were lies.

For years Hearst and his crusaders pushed for the direct election of U.S. Senators and finally, in 1913, the 17th amendment was ratified under the Progressive/Socialist Woodrow Wilson. Ever since 1913, not a single state in the union has had true representation at the Federal Legislative table and the American people have had no buffer to protect them from the power grabbing clutches of an overbearing and ever expanding Federal government. Our system of checks and balances was shattered.

Ah, but what has the 17th done for the Progressive/Socialists who believe in expanding the influence of the Federal Government? It established its dominance over the states. It lengthened its reach into the homes, bedrooms and lives of the very people who were fooled into supporting its ratification. It broadened its influence over private businesses and industries. It allowed it to establish 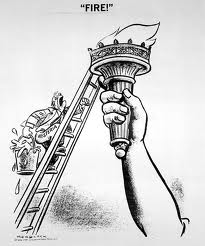 control over the minerals and precious resources under the soil and in the forests located within the legal boundaries of each sovereign state. The Federal Government has assumed millions upon millions of acres of state land and declared them National. It has allowed them the latitude to arbitrarily impose hostile and oppressive regulations that are intended to target and destroy industries that do not help them promote their agenda. Look at this administration’s promise to “bankrupt the coal industry” and their promise that “under their policies, energy costs would skyrocket”. Look at Obamacare, it is tragic, Socialist garbage designed to do two things; cripple the health care industry and exact more control over the American People.

Since the states have been handcuffed, the Federal Government can waste our tax dollars on any program that it feels will advance its agenda; take Solyndra for instance. Because spending is now unfettered we have a national debt approaching 18 trillion dollars; we are broke. The 17th amendment gave way to this kind of reckless abandon and insane Executive power.

There are two questions that I seek answers for: When will the American people realize that it’s time to re-establish states rights and take back this nation from a radical and out of control Federal Government? and When will The honor, dignity and authority of the upper chamber be restored so that a U. S. Senator can, once again, stand strong and courageously in defense of his or her state?

It’s time to Repeal the 17th Amendment to the United States Constitution.