A Nation Conceived In Liberty

By the time that you read this, our nation will already be foundering.  I write to you with the hope that you 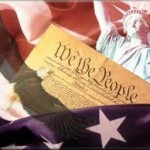 might fortify the fine people of this republic with the wisdom and insight that you so generously imparted upon our Forefathers; that wisdom seems to have been temporarily replaced with a philosophy that is contrary to the spirit in which our founding documents were drafted.

How can we inspire and motivate the people of this fine nation to take a stance on a concept that was born 238 years ago?  What can we do encourage the American people to see and think beyond the temporary and debilitating sustenance promised by Progressive/Socialists?  How can we make the people understand that this sustenance isn’t free; that it actually comes at an extremely high price?…a price that very few would be willing to pay if they only knew what the actual cost was. How can we teach them to support and vote for those who promise them the intangible concept of liberty over those who will promise them free things; things that could be easily purchased twofold if they only had the freedom to buy them with money that they have earned with their own two hands?

The golden doors of opportunity that began to swing at the inception of our Constitutional Republic were never meant to be the gates of guaranteed equal results.  Wealth was NEVER meant to be distributed but rather earned by those who were wiling to take a chance and work hard; those who were unable or unwilling to take the chance became the engine to industries, markets and professions and were compensated for their efforts and took pride in their participating in something great.  Welfare was a term that described the general presence of well being rather than the “gifting” of the fruits of another’s labors. Hard work was an honorable and respected way of life rather than a catalyst for pity and entitlement.  When did the rough and tough American turn into the soft and needy baby bird sitting comfortably in a nest with their beaks open?  Our Founding Fathers must be shaking their heads.

Dear Liberty, our forefathers established a method of immigration because they knew that people would want

to come here.  Why aren’t we following it?  Why are they being twisted into meaning something that was never meant to be?  Immigrants used to flock to this county to become Americans; they once took great pride in taking an oath to their new nation…a nation that welcomed them with open arms, that had a language that the new citizens wanted to learn and offered them the opportunity to participate in something special that wasn’t available to them in their former countries.  Now they sneak in through our back door and demand that our laws be changed and lobby for policies that will change our system of government to mimic those of the tyrannical, oppressive countries that they have left behind. What irony!

We have those who call themselves Progressives; their shallow attempts to make themselves sound “worldly” and “open minded” are overshadowed by their ignorance of how oppressive and tyrannical that Socialism actually is.  How can they categorize their thinking with the concept of “progress” when their chosen system of governing is as old as the very humus on which they stand?  What do they want to progress to? The word progress usually alludes to some form of improvement. Liberty, can someone please tell them that this Representative Constitutional Republic can not be improved upon with ancient and evil forms of control?  The policies of their current president are living proof that their theories don’t work.

This president has gotten virtually EVERYTHING that he has asked for and something’s that he has just illegally “taken” by Executive Fiat and our nation has suffered dearly for it; economically, socially and politically both domestically and abroad. We are weaker today, in ALL respects, than we were 6 years ago.  Have previous administrations failed as well? Yes they have! Failure always occurs when we move away from our Constitutional ideals and adopt Socialist policy…it’s been happening for years.  Barack Obama is not the only abuser of the Executive Office, he is, however, the most obvious and blatant Socialist that we have seen since Woodrow Wilson.  It’s time to wake up and stop defending this enemy of our Constitution.

you took MY money and gave it to a private industry.  The death of Bin Laden has done NOTHING to further my liberty or secure my freedom.  Contrary to common belief, GM has NOT paid back all of the money that you shoveled into it; do some research and you’ll see that I am correct!  The American people can still feel the sting from the slap in the face that we received when GM took OUR money and invested it overseas where they are currently bolstering foreign economies and hiring foreign workers because YOUR regulations made it more feasible for them to invest abroad…nice work Mr. President; I wouldn’t exactly call that a success.  And by the way, have you seen Detroit lately?

Dear Liberty, can you tell me why the Progressive/Socialists demean, belittle and degrade Constitutionalists? They go out of their way and use Federal agencies to target groups that espouse Constitutional ideals; they label them with vulgar monikers like “tea baggers”!  I’ve heard our president actually use that term! He claimed that he didn’t know what it meant but that was a lie; it was an outward  verbal display of his hatred toward Constitutional principles and this country in general.  Since when did being a good American Patriot become a bad thing and being a Socialist become acceptable? This is a sad time for America!

I believe, however, that we will overcome this tyranny…America is here to stay; her ideals are divinely inspired and infinite while the Progressive/Socialist agenda is devised of evil means and doomed for failure; the American People can see it…we can FEEL it.

Americans are tough!…we storm beaches and secure victory against overwhelming odds; we face tyranny without hesitation or fear because our true fear is leaving a republic to our children where they will be forced to live beneath the oppressive hand of a tyrant.  We’ve been given this beautiful gift of freedom and we won’t stand by idly while Progressive/Socialists abscond with our liberties that have already been bought and paid for with the blood of heroes who were willing to die to keep us free.  We’re not for sale…we’re not giving up…America will rise again!